There have been tons of speculating and bitching over at the Genii forum about Bill Nagler’s review site. The topics range from whether or not he is exposing effects and whether or not he has an ulterior motive and the proverbial ax to grind to whether his terse reviews are in fact useful. 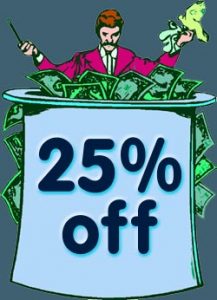 It seems to me that there is in fact a larger issue here than whether or not his reviews are exposure or other tedious topics. Maybe the real issue is why is there so much true garbage being released. Do people really think they can get rich from selling trash to magicians? I understand the need for a somewhat loose description of an effect when you are trying to sell it and if you have ever sold a trick you will as well. But what if that trick is utter shit? Then no matter how you word the ad, whomever buys it will be disappointed.

I have been deceived by advertising before like everyone else but have also been pleasantly surprised by the real working when I received the actual item. I’m not stupid enough to believe everything I read in an add but I have trusted some people not to sell me a piece of shit. Lately, that’s not been the case. I’ve felt really ripped off more often than not. I now only stick to names that I trust some of which are, Peter Duffie, Martin Lewis, Karl Fulves, Jon Racherbaumer, Phil Goldstien and a few others. Of course I won’t put everything I read by these gentlemen into my act straight away but I always find what they have to say interesting and useful and clever.

For a long while I only purchased books but not even that is safe now. I recently purchased ‘7 by Michel Huot’ written by David Acer. This is one of the worst books on magic I have ever read. Even for the low price it is bad. I will try to give a longer review here for those of you that feel it is needed to judge something. Wouldn’t you trust a friend if he told you this book was shit and didn’t elaborate though? And, ain’t you and me pals? Well, whatever, I’ll explain anyway…

First of all I applaud the idea to bring back low priced books of only a few tricks. I love the booklets that Marlo, Walton and Karrell Fox did in the past. However, if you are only putting seven tricks in a booklet surely six of them should be good. Right?

That’s not really the case here. The first item in the book is an OK trick with four aces that is a variation of a packet brainwave effect. It is usable and would probably fool people but it doesn’t really add anything new methodologically to the plot. I’m sure I’ve seen this exact handling somewhere before. Think of this; using only the sleights you know and normal cards, make up a method for a trick where the one ace selected of four has an odd colored back. Don’t try too hard. Got a method? Good. I bet it’s exactly what’s in this book.

So, nothing new as far as method but what about presentation? Well there is a cute little presentational idea that you would be able to adapt to almost any effect of this type. Ah, but there’s the question isn’t it? Should we publish our personal presentations to known effects? Even if it doesn’t add anything to the method? This used to be the kind of thing that was passed from magician to magician in a friendly way. “Oh that’s the way YOU do it? That’s nice, may I use that little touch?” But now they end up in books when magicians don’t have enough tricks to fill them out. That’s really nice that you do the trick that way, just keep doing it that way and don’t publish it. What do our readers think? If you think it is OK for magicians to publish only their presentations to effects (Michael Close calls them ‘personalizations’) write and let us know. Our emails on posted on this site and I would be very curious to know what you think. After all I do have a bunch of personal presentations of known effects if anyone is interested. I swear I use them and they work for me. Simon Lovell has written two large books of just that. They are worthless to me because I already knew the tricks when I bought the books and I would never say his patter even with a gun pointed to my temple but did anyone get value from HIS books? Probably. If they were not very well read to begin with. I think a lot of current magic authors thrive on buyers not being that well read.

Back to the book being reviewed, 3 of the seven effects are situational magic. This is a currently popular trend in magic that I can not stand but it is another topic for another time. Suffice it to say that if slipping on a D’lite and waiting for someone to put up a Christmas tree is you idea of fun, then maybe you would love this book. And, if carrying around a gaffed spoon for a trick that you can only do in a diner at a certain moment and ONLY if you drink coffee or tea is your idea of cool magic and a great inclusion in a book with very limited space, then maybe you should stop reading right now and go buy this damn book. If you like it, fine. I don’t and I have one question for the people that do this kind of thing. What do you do when there’s not a tree around for you to climb into and load a card? What do you if you want to work? If you want to be able to do magic anytime? Surely one of these types of tricks per publication would be enough. But three in a book of seven? Give me a break.

Next in the book are two terrible card tricks. One is a card trick that has an unneeded move in it but that’s OK because you make the spectators turn away from you while you do it. What laymen do you know that will go for that bone-headed idea?

The other terrible card trick is the much hyped four card change which, I quote, ‘an astonishing new sleight!’ Well it certainly is that. I’ll be astonished if it fools anyone. In fairness I won’t reveal what it is but go read the description and remember what I’ve said. Think of the first method you can. That’s probably it.

Now I come to the final trick in the book. This is really why I bought the thing but by the time I got o it I was so annoyed I wanted to burn the entire thing. The signed quarter in balloon is not a bad idea but it’s not exactly as described either. Or, at least, all is not mentioned in the description. For example, you must bring out the balloon from behind a table or out of your ass already inflated. So much for walk around, eh? Yes, it must stay concealed until brought into view.

However, having said all that I think it would be an OK trick to perform. It should have been marketed as a platform effect and by itself in a manuscript with balloons and the needed gaffs, which are not included. Then, perhaps it would have been worth ten bucks or so. Don’t believe Steve Bryant, he rarely knows what he is talking about as far as magic. He can help you with proper English usage, sometimes. But I don’t think this trick is a killer that Blaine will want to use in his next special. I think it’s kind of a good idea but with limits and gaffs that were not included or described and when a book only has seven tricks in it, shouldn’t they all be great?

So there you have a more in depth review. Is it worth it? I told you it was shit before we started. My point is this; maybe if there were more thought involved and more care in the magic releases now then we wouldn’t even be having this discussion. It’s not the ads that are getting more deceptive; it’s the magic itself and creativity that are at an all time low. Jay Sankey put out the same trick 5 times and nobody complained. He used to at least work out creative and interesting magic. Even if you didn’t use his magic as written, you could usually take something good away from it. ‘Leaving Home’ and ‘Airtight’ are good tricks. What happened?

Slow down and think if you plan to release or market something. Put some effort into it. This is why people like Bill Nagler feel ripped off. In the meantime, go over to Mr. Nagler’s site and check out the honest reviews. It’s so bad now that you should know exactly what the method is before you buy something. It’s difficult to trust anyone.

I may be releasing some of my own magic soon in book and trick form. I am only releasing items that I actually use myself and I feel are interesting or different. But then, you all can see for yourself and tell me how bad my own ideas are. That’s what it’s all about isn’t it?