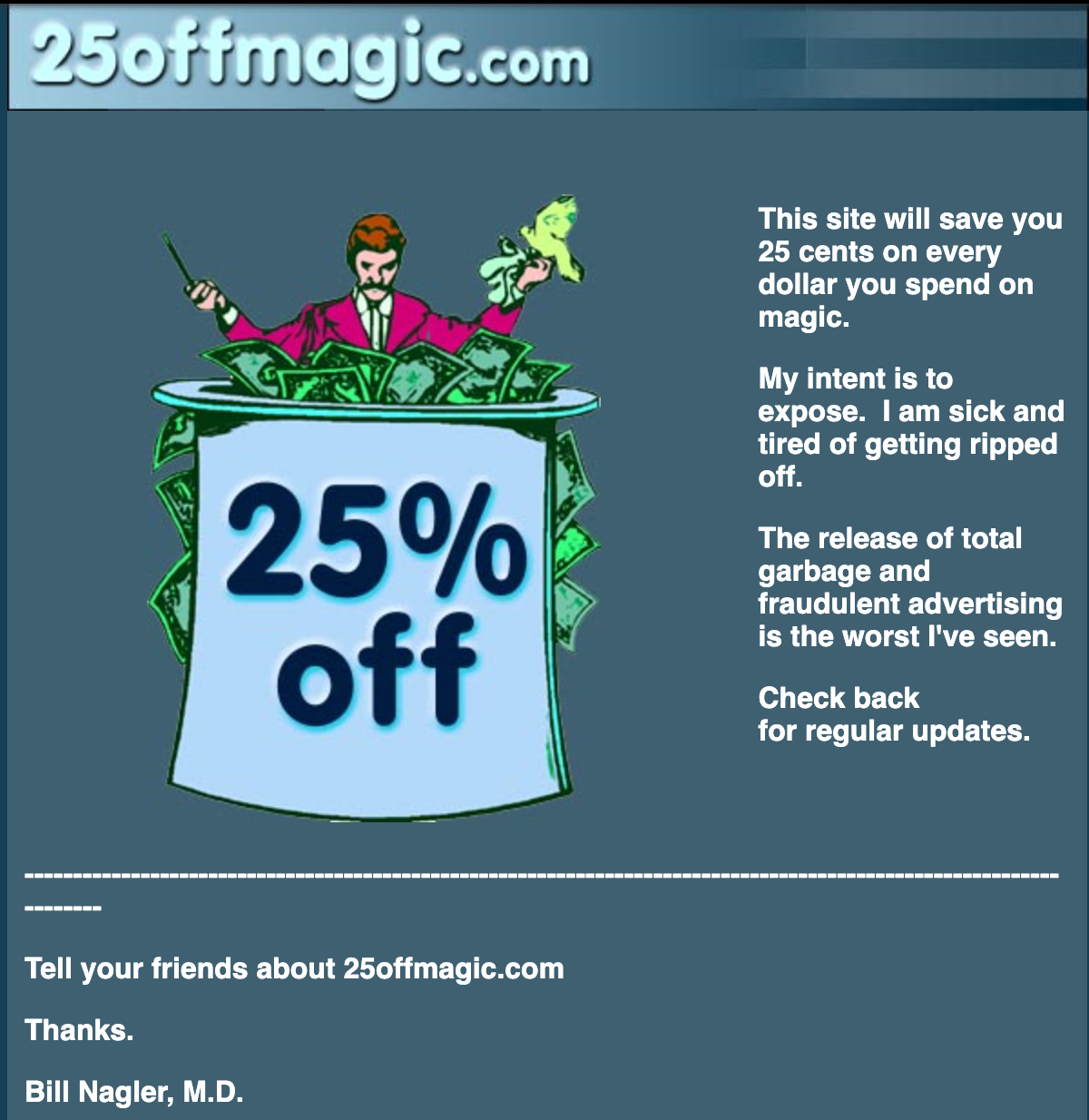 Does Tim Trono whine like a big girls blouse or what?

So a guy called Bill Nagler starts a simple web site called 25offmagic.com and has the balls to stick up his views on some commercially available magic effects. He splits his reviews into two sections, what he thinks is ‘DRECK’, by which he seems to mean ‘piss poor tripe’ and ‘MACHAYA’, which is the stuff he thinks is worth a crap. 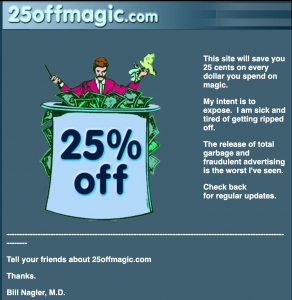 He posts simple and direct reviews, many of which are no more than a couple of sentences (something FooCan did from the 1st issue). And suddenly a thread on Genii forum erupts.

There seems to be a bigger split on this topic than the old ‘Blaine or Copperfield’ topic, the only difference is that some forum members have actually got a point of view that they can back up on this one.

There are some sad tossers who don’t think Mr Nagler (I call him Mr Nagler because I have the highest respect for someone who tells it as they see it) doesn’t have a right to post his opinion on the internet, so much for free speech eh?

Most of those getting upset about it are basically insulting magicians because they obviously don’t think that they are capable of forming their own opinion about anything.

Mike ‘I got a hand giving you the finger on a stick’ Close and Jamy ‘pompous twat’ Swiss pour out their opinions in reviews and apparently we should suck their magic wands, and yet while I like reading their opinions, they only go a small way to swaying my opinion on anything. I have purchased many an effect after reading a negative review and at least 50% of the time have been happy with my purchase. Of course I read up all I can before laying out my hard earned moolah on a trick, but the bottom line is, I have a brain and I make my own decision when all is said and done.

I own at least one item off Mr Naglers ‘Dreck’ list that I love and use on a regular basis. So what’s the problem here? Unless the majority of magicians are retarded, they are more than capable of drawing their own conclusions.

The biggest whiner by far on the Genii thread is probably Tim ‘look I just published another total turd with misleading advertising’ Trono. I wouldn’t mind but his posts are just a bunch of pathetic whining. Someone give him a needle loaded with bad crack and shut the prick up please.

He might as well post ‘to hell with free speech, magicians are thick’. He seems to think that the mere fact Bill Nagler has put up that site that the moderators of Genii should ban him. This is one of his posts…

It surprises me that Nagler is still allowed on this board and openly promotes his site which clearly exposes. Even when he does give a good review such as Predator he exposes it thereby hurting the product, the producer, and those of us who purchased it.

While Genii forum managers could warn or even ban someone for exposure on their board, it would be Hitleristic of them to ban someone just because they have a site someplace else that isn’t related to Genii that might upset someone.

Then Mr Trono refers to ‘Mr Naglers ulteria motives’ and then refrains from mentioning what they are:

The thing that bothers me in this case is the ulterior motives and the about face Mr. Nagler has done on several items as outlined before (and there are several other about faces that I don’t go into).

Tim, be real – if you got some valid reason – post it. Saying ‘ohh there is stuff but I not gonna say’ is just gay.

The bottom line seems to be that Bill Nagler pointed out some stuff about a bunch of tricks, since Murphys ‘we now only sell trade cos we couldn’t provide a retail service worth a crap’ Magic Supplies happen to publish a few of them Trono don’t like it. Buy a vowel Timbo, if you stop marketing utter gobshite you’ll get less bad reviews.

One of Tim Trono’s biggest gripes seems to be from his first post on that thread when he said:

In reviewing Just Passin Thru (which by the way receives rave reviews from the likes of Michael Weber, Michael Close, Paul Harris, Kenton Knepper, and NUMEROUS others but I guess we should listen to you the “doctor”????!!!), you state it is “marconick dowel penetration poorly recycled” – it is painfully evident that 1) you did not read the manuscript and see acknowledgment to Marconick and that 2) you are dreadfully backwards in your analysis. The basic idea was published in the 1960s in Marconick’s Original Magic edited by Peter Warlock. His handling, though the initial source and very clever for the time, was fairly rudimentary. Mr. Niedzwiecki developed his idea completely independently of Marconick but we felt it ethically correct to acknowledge the Marconick handling. Have you actually LOOKED at Marconick’s Original Magic and compared the two? ANYONE comparing Mr. Marconick’s handling to Mr. Niedzwieki’s handling will agree it has been taken significantly further – really to a whole new level. Again, all of this was run by some of the top names in magic BEFORE it was released and they agreed it was a vast improvement and overall a wonderful and important release.

Saying that Just Passin’ Thru is ‘the marconick dowel penetration, poorly recycled’ is not exposing it, exposing it would have been to say ‘its a pencil with a slit in it’. And just because the original Marconick thing gets a mention in the instructions doesn’t mean Bill shouldn’t have mentioned it. It might be an improvement, but does it warrant a £15/$20 trick? Surely a little improvement like that is more suited to being published in a magazine or a book? If not, doesn’t it at least warrant a decent gimmick being provided? The pencils you get with ‘Just Passin Thru’ are thick as a tree trunk and you really do end up getting covered in lead when you try to use it. The bottom line is just like Bill says – it’s a step back from Misled. Hell, its even a step back from AE which is a crap thread hook-up. At least AE has a different look to misled.

I do love how Trono says “You fail to mention the fact that Murphy’s Magic Supplies closed your account down as we had concerns about you being a legitimate dealer, proposed some reasonable guidelines, and you subsequently refused to follow those.”

So Tim, you closed his account, which means he did successfully open one to begin with and you did actually supply him? Either Nagler did a good job or you let just about anyone open an account so they can buy chod from you.

What is best of all, is the hilarious way everyone is complaining and Bill doesn’t reply, instead he just posts ‘I just slammed more shit – come read it’. – BRILLIANT!

The most sensible posts on that thread so far are the ones from the guys who pointed out ‘I don’t buy stuff unless I know how it works’ – that’s the sign of a worker. If you actually do magic for real audiences, you have to know the limitations. Screw all this ‘you buy the secret’, if you work magic for a living then you need to know stuff like ‘do I need a jacket’, which is the important thing left out of the advertising for cigarette up nose for example.

Having said that, if you bother to watch the demo video at www.cigaretteupthenose.com, you’d probably not buy it. I don’t own it, but it looks to me like the old growing wand gaff on a pull. If it’s not that then who cares – I just gave you a free method. Paint up a dowel rod, make a sliding filter bit and whack it on some elastic – ohh a $30 saving just for reading this cackka!

I repeat what I said before – magic dealers – stop marketing utter crap and you won’t get slammed! If you do market good stuff and get the odd bad review – chill out! Magicians are not all as thick as you think, many of them can make their own informed decision. Avoid missing out important facts in your advertising and don’t tell lies and you’ll be OK. Shout and complain all you like, but trying to cripple free speech is not a good way to cover up the fact that you market dog poop.

OK, I won’t harp on about this much more, but if you’ve been following that Genii post I mentioned yesterday you will see that Tim Trono has whined again. This time he claims:

Mr. Nagler’s “reviews” are obviously colored by bias so I am not sure how they can accurately “help”, other than that they expose items which I find ethically troubling.

Mr. Nagler’s goal is to do others harm period. This is absolutely apparent from his complete turn about on several items. I have seen and have the correspondence to back it up. Thus trying to rationalize anything other than the fact that Mr. Nagler is trying to do harm to others is ludicrous and trying to justify that is sad.

Then he goes on to bash Nagler some more without giving any real freakin’ evidence. Saying ‘I have the evidence’ and then not showing us jackity shit is not proof of anything.

I have evidence that Tim Trono likes having sex with rodents.

Of course I don’t really, but I don’t have to prove I have evidence, I just have to claim I do. What is that about?

Tim, you’re not fooling anyone, we all know you’re only mad at Bill for saying he doesn’t like a bunch of your tricks. If you’re not going to post any evidence, shut the hell up.